The winner of the third edition of the Medical Student of the Year competition is 24-year-old Filip Olekšák from Comenius University’s Jessenius Faculty of Medicine.

The Svet zdravia (World of Health) network of hospitals and its partners announced this year’s professional competition for students in the fifth and sixth years of study at faculties of medicine in January. Students studying the specialization of General Medicine were able to test their theoretical and practical knowledge and experience.

From 7 to 9 April 2017, the competition final took place at Spišská Nová Ves hospital. The twenty best medical students underwent a combination of specialized workshops and competition activities in the practical conditions of a real hospital. As a part of the practical medical workshops, the finalists tried out the basics of laparoscopy, cardiopulmonary resuscitation, triage in the emergency ward and intraosseous access. In terms of non-medical areas, these future doctors became familiar with the economic aspects of running a hospital, how health insurance works, and the principles of communication with patients. All the finalists received a guaranteed employment contract with the Svet zdravia network at a hospital and department of their choice.

The overall winner of the competition was Filip Olekšák, a medical student at Comenius University’s Jessenius Faculty of Medicine. “I am really surprised and happy at having come first. The hardest thing for me was the resuscitation exercise, and the thing I enjoyed the most was the laparoscopy simulation. I will have state exams soon, and after that I would like to work in paediatrics at a Slovak hospital. I have already lived abroad, but I think home is where the heart is,” said the Medical Student of the Year for 2017. Olekšák won a financial prize of €3000. Second place went to Zuzana Horváthová, a sixth-year student at Comenius University’s Jessenius Faculty of Medicine, and third place went to Ján Sýkora, a fifth-year student also from Comenius University’s Jessenius Faculty of Medicine.

Interesting facts about the competition:
- the competition attracted 133 medical students from the fifth and sixth years of study in the specialization of General Medicine;
- a semi-final (online) quiz was completed by 123 contestants;
- the twenty finalists comprised seven from Comenius University’s Faculty of Medicine in Bratislava, seven from Comenius University’s Jessenius Faculty of Medicine in Martin, five from Pavol Jozef Šafárik University in Košice, and one contestant from the Faculty of Medicine at Masaryk University in Brno;
- there were ten men and ten women: twelve sixth-year students and eight fifth-year students.

The final medical workshops:
- the basics of laparoscopy (finalists practically simulated mini-invasive operational methods. Their aim was to work in a simulated abdominal cavity, find a specific structure and perform a targeted cross-sectional intervention);
- cardiopulmonary resuscitation (the role of the finalists was to save a human life through exact performance of the Heimlich manoeuvre; they were supposed to remove a barrier from the air passages and simulate the work of an ambulance worker in the field by using a defibrillator and vital medical equipment);
- intraosseous access (the finalists learnt how to insert a catheter for fluid and medicine intake right into the bone marrow itself);
- triage in a modern emergency ward (finalists became familiar with work organization at the emergency ward, performing triage, and the classification of patients according to the seriousness of their condition; their role was to also accurately evaluate an electrocardiogram and decide on the further diagnostic steps and treatment within a few minutes).

More information about the competition: Medical Student of the Year 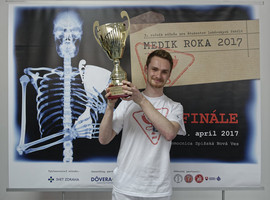