CANCELLED! Democracy, human rights and the rule of law in today’s Europe (lecture of the Secretary General of the Council of Europe)

We are very sorry to inform you that the lecture was CANCELLED.     8 March 2017, 9:00 am, Rector´s Hall, Comenius University in Bratislava, Šafárikovo nám. 6, 1st floor

You are cordially invited!

Thörbjorn Jagland was elected Secretary General of the Council of Europe in September 2009. In June 2014, he was re-elected, and his second term in office commenced on 1 October, 2014. He was the President of the Storting (Norwegian Parliament) from 2005 to 2009. He is a member of the Norwegian Nobel Committee, which awards the Nobel Peace Prize every year. He has held two of the most influential governmental positions in Norway: Prime Minister (1996 - 1997) and Minister of Foreign Affairs (2000 - 2001). After serving as Foreign Minister, he was Chairman of the Standing Committee on Foreign Affairs and the enlarged Foreign Affairs Committee in the Storting for four years (2001 - 2005). He also served as Chairman of the EEA Consultative Committee during this period (2000 - 2005). 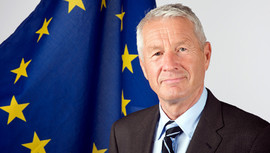