Prof. Turner´s cooperation with Comenius University, namely with Jessenius Faculty of Medicine in Martin, began in the second half of the 90´s.

Professor Turner, recognized expert in the field of neurochemistry, became 117. Honorary Doctor of Comenius university. This year he is the third one to receive of honorary doctorate of Slovak oldest university. In January this year, world´s leading microbiologist John Vilček was awarded and in October, German Chancellor Angela Merkel received an honorary doctorate.

Prof. Turner´s cooperation with Comenius University, namely with Jessenius Faculty of Medicine in Martin, was launched in the second half of the 90´s. "The cooperation has resulted in several long-term and short-term study visits of PhD students and young researchers from Martin at University of Leeds and into a large number of presentations and publications. Bilateral projects in field of neuroscience formed the basis for joint scientific activities, "said Associate Dean of Comenius University doc. MD. Mištuna, MD, PhD., Mim. prof.

Rector of Comenius University prof. Mgr. Karol Mičieta, PhD appreciated the importance of Turner´s scientific activity as well: "One of the objectives of the professor's research work is progress in treatment of age-related diseases. He was the first scientist to identify and clone a gene ACE2 and his current research identified a gene ACE3 indicating the importance of fat and cholesterol rafts in amyloid in case of Alzheimer's disease. "

Scientific work of prof. Turner dealing with age-related diseases is also linked to dementia research. Professor Turner pointed out that 60% of people with dementia live in developing countries. The number of people suffering from this disease is increasing and an epidemic in the future can be expected: "That´s why there is a need to invest in research of dementia treatment, which is disproportionately less supported than research on the treatment of cancer or heart diseases. It is gratifying that the European Union is aware of this issue and decided to make it a public health priority. "

Comenius University in Bratislava awarded the honorary degree of Doctor Honoris Causa to domestic and foreign individuals who have contributed significantly to the development of education, science, culture, democracy, human values and contributed personally to the progress of human civilization by spreading education and humanism. In the past, personalities such as UN Secretary General Kofi Atta Annan (1999), the 14th Dalai Lama and Nobel Peace Prize holder Tenzin Gyatso (2000) and Nobel Prize winner in Chemistry Gerhard Ertl (2009) were awarded an honorary degree at Comenius University. 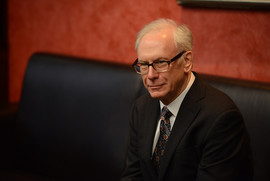 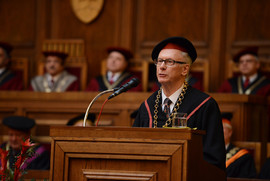